You are here: Home / Training / FHWA Work Zone Safety Grant Products / Guidance on the Use of Automated Flagger Assistance Devices

Some documents are made available in PDF format. You will need Adobe Reader

This material is based upon work supported by the Federal Highway Administration under Grant Agreement No. DTFH61-06-G-00004

What is an automated flagger assistance device?

Automated flagger assistance devices (AFADs) are mechanically operated temporary traffic control devices that function under the same operational principles as traditional flagging. AFADs are considered a safety enhancement because they minimize flaggers’ direct exposure to traffic by allowing them to control the flagging device from an area away from traffic, such as behind a guardrail. As a result, the AFAD increases worker safety compared to traditional flagging methods. It is important to recognize that AFADs do not eliminate the need for qualified flaggers at the work zone. Personnel should still be traditionally trained and available to step in as a manual flagger in case of a technology malfunction, or driver intrusion.

Two types of AFADs are recognized in Part 6E of the 2009 Edition of the Manual on Uniform Traffic Control Devices (MUTCD). The first type uses a remotely controlled Stop/Slow sign mounted on a trailer or movable cart. The second type uses a remotely controlled red and yellow lens and a mechanically gated arm. A mechanically gated arm is required on the Red/Yellow lens device, and may be added to the Stop/Slow device to improve conspicuity and driver compliance.

Several States that recognize the benefits of AFADs also impose further device standards and guidelines that surpass the ones required by the MUTCD, such as additional supplemental warning signs, backup battery power, and flashing lights or gate arms on the Stop/Slow signs.

This document is not intended to act as a book of State and/or Federal standards; rather, it summarizes guidelines for when AFADs may be an appropriate option. It is important for anyone wishing to use an AFAD to refer to the MUTCD in addition to checking with their State and local agencies for the most current version of their governing authority’s policy or standard specifications.

What are the factors affecting the use of AFADs?

AFADs are typically used for short-term or intermediate-term lane or road closures such as bridge maintenance, haul road crossings, guardrail repair, and pavement patching. Their use is discouraged during long-term closures. Most States permit the use of AFADs during daytime or nighttime operations, but if used at night, the AFAD must be illuminated in accordance with Section 6E.08 of the MUTCD.

It is preferable to place the AFAD within the shoulder of the road; however, if the shoulder is not adequate, the AFAD may encroach on the traveled lane provided that the appropriate sight distance is available. If this is the case, the gate arm must not extend into the adjacent lane.1

AFADs have been successfully implemented on roads with a wide range of average daily traffic (ADT) counts. Although the MUTCD does not provide any limitations in this area, some States have established supplementary guidelines. For example, the State of Virginia allows AFADs in temporary lane closures on two-way roads when the ADT is below 12,000 vehicles per day,2 whereas the State of Minnesota restricts their use to roads with less than 1,500 ADT.3

There are two methods of using AFADs in a work zone. The first method uses an AFAD at each end of the work zone while the second method employs an AFAD at one end and a flagger at the other end. Two separate flaggers are commonly used to operate either method; however, a single flagger may remotely control two flagging stations provided that the flagger has a clear view of each station, and of approaching traffic in both directions. In accordance with the MUTCD and crashworthiness standards, advanced warning signs must alert traffic in both directions of an impending stop and when not in use, the AFADs must be removed from the clear zone and the advanced warning signs covered. What are the limitations to using AFADs?

AFADs shall only be used in situations where there is just one lane of approaching traffic that needs to be controlled. Additionally, since AFADs are not traffic control signals, they must not be used to replace traffic signals or other continuously operating traffic control devices.

While AFADs are a method to improve the safety of flagging operations, they do not eliminate the need for trained flaggers. AFAD operators must be certified flaggers trained on how to operate the device correctly, and the operator must be able to step in and manually control the lane closure in the event that an AFAD malfunctions. A Florida guideline on temporary traffic control requires that if one AFAD operator is used to manage both ends of the closure, a second qualified flagger must be present onsite to assist with manual flagging in the event of a malfunction.9

While removing the flaggers from the direct flow of traffic improves the flaggers’ safety, there are situations where drivers may need to receive additional verbal warnings and/or directions from flagging personnel. In these cases, placing certified flaggers on the shoulder of the road may be a more appropriate option to ensure that the drivers’ needs are met. This could mean eliminating the AFAD altogether, or simply stationing the AFAD operator closer to the flow of traffic to assist the road users.

One study in Virginia found that some drivers at a single work zone location were misinterpreting a supplementary sign on the Stop/Slow AFAD.10 Drivers interpreted the sign, which read, “Wait On Stop — Go On Slow” to mean that they should stop at the stop sign then proceed slowly. Since the MUTCD considers “Go On Slow” as an optional part of the sign, the workers covered up the sign to only show “Wait On Stop.” This action improved driver compliance on that road. None of the other Stop/Slow AFAD implementation sites stated similar concerns.

Several AFAD systems manufacturers offer the option for an intrusion alarm, but a Virginia study found that workers were barely able to hear a 128 decibel alarm at a test facility when there was no traffic or running construction equipment.11 The project supervisors speculated that the workers would not have heard the alarm at all if the system was installed in an active work zone.

How much do AFADs cost?

Although costs vary by manufacturer and system specifications, the average cost for a set of AFADs ranged from approximately $25,000 to $30,000. Some companies also rent AFADs for approximately $3,000-$3,200 per month, but these rates vary by geographic location and season; for example, renting an AFAD during the construction season will typically cost more than renting one during the off-season.

Payment for AFADs is handled differently among State DOTs. For example, the Florida DOT bids the items as a contract unit price per day of use. North Carolina stipulates that short-term use (less than 90 days) is billed per day, whereas long-term use (greater than or equal to 90 days) is billed per unit.12 In some Missouri DOT districts, the DOT purchased AFADs for maintenance purposes and used them for the life of the device rather than billing them to various projects.

How do workers and drivers feel about AFADs?

After using AFADs on 59 projects during one construction season in Maine, one hundred percent of the surveyed workers recommended purchasing additional units for use throughout the State. The AFADs were equally valued by construction managers and crews.13 Similarly, when asked about their experience with AFAD systems, flaggers in Missouri gave “undeniably positive” responses in favor of the devices.14 The AFAD operators expressed that they felt significantly safer when they were operating the AFAD away from the flow of traffic compared to when they would stand in the road as a human flagger. The workers praised the system for being easy to set up, intuitive for drivers to understand, and safe for workers and drivers. In a field evaluation, one construction manager stated, “They are a cost saver, labor saver, and are a safer way to control traffic, as less people are in the traffic.” Another commented that when they used the AFADs they had little difficulty getting someone to volunteer to operate the device.

In the Missouri evaluation, the public survey results also indicated that drivers view the AFADs as an improvement over flaggers. Only one out of forty-nine survey responses registered a complaint that the gated arm was difficult to see clearly. The rest of the responses conveyed positive reviews.

In many situations, AFADs may be an appropriate alternative that can potentially increase the safety of flaggers by removing them from the direct flow of traffic, especially when there is no viable escape route for a standard flagger position during operations. Despite their wide applicability for short- or intermediate-term closures on bidirectional two lane roads, AFADs should only be operated by trained flaggers and they should not be used on road closures with more than one lane of traffic in each direction. AFADs with the red/yellow lens are more commonly used than the Stop/Slow AFAD, but both are deemed effective at a wide range of traffic volumes. The overall assessment of AFADs from workers and drivers is positive, and their use is recommended.

The MUTCD suggests that States choosing to use AFADS develop policies to govern their application. As recommended in Section 6E.04(17), key points to include in the policy are: guidelines for when to use one AFAD or two, maximum spacing between AFADs, volume-based criteria, fail safe procedures, and recommended additional signing. Table 1 briefly presents the States that have established standards for the use of AFADs that go beyond the requirements of the MUTCD. As State standards are constantly being revised and re-written, please review the most current version of your State and local standards prior to using an AFAD.

Once a State has created its own policy, the next step is to encourage AFAD use in maintenance and construction activities. Traffic control plans for new projects can illicit contractors to use AFADs in lieu of traditional flaggers. Information on how and why to use AFADs can be used to supplement pre-established flagger training courses or developed into its own course. If public compliance or acceptance is a concern, States may conduct public outreach efforts on increasing awareness related to AFADs and appropriate driver response through mailings, television ads, or billboards. 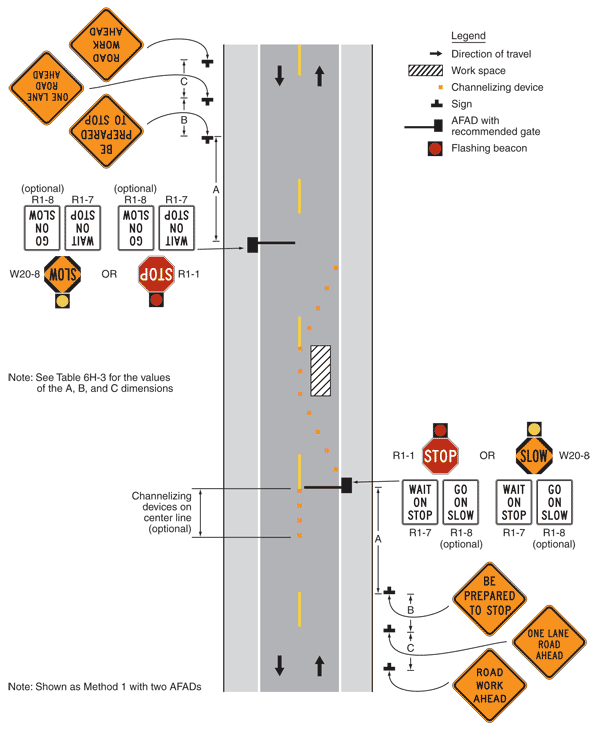 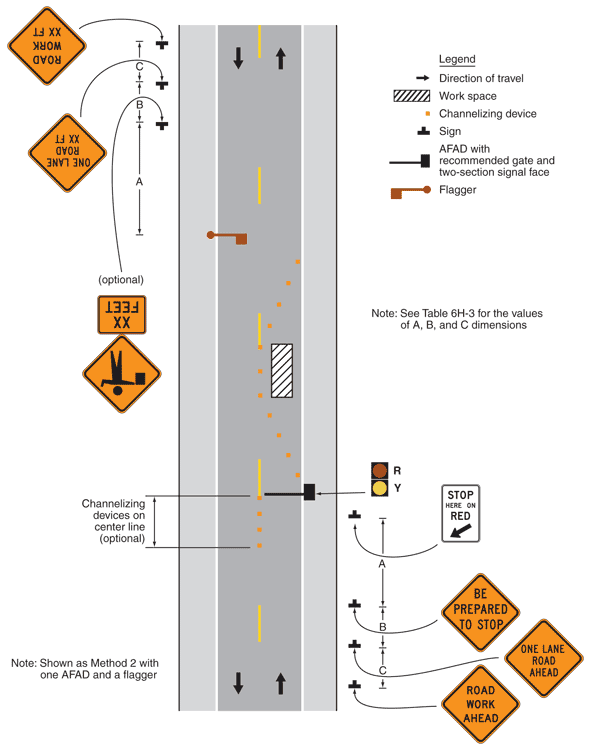 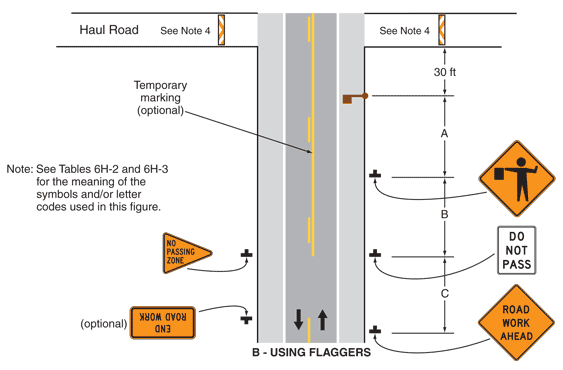 3 Minnesota Department of Transportation, Guidelines for the Selection of Temporary Lane Control Systems in Work Zones, Two-Lane Two-Way roads Closed to One Through Lane, available at http://www.dot.state.mn.us/trafficeng/workzone/doc/Guidelines-LaneControlSelection-Draft.pdf [ return to note 3. ]

10 Virginia Transportation Research Council Research, Report on the Evaluation of the Autoflagger in Virginia, available at http://www.virginiadot.org/vtrc/main/online_reports/pdf/07-r12.pdf [ return to note 10. ]